Over the last 15 years, YouTube has radically changed from its inception. Given that the nature of technology is unquestioned progression, rarely do we dwell on what once was in the digital realm. With the links provided below, we can observe the gradual shift away from user generated content, and the drift towards traditional media powerhouses. From here, we see how the independent user has been silenced and how a hobby done for fun has turned into a cut throat business.

September 28, 2006 features seemingly random videos from independent users, and features independent "active channels." While traditional media reported somewhat on the buzz the site was generating publicly, the MSM had not bothered to really establish a presence on their themselves.

November 13, 2007 is one year after Google acquired YouTube. Promoted content that was curated for the homepage is clearly defined.

November 14, 2009 HD videos are introduced, "spotlight" content is given top priority, but there still are miscellaneous recommended videos, and a "popular section." The five star video rating system video is phased out for a “like vs dislike” system the same year.

March 16, 2012 still has a selection of miscellaneous user content on the homepage. Featured content is to the side and clearly defined.

May 15, 2013 is when the platform began its transformation into the antithesis of its founding values. Verified accounts, TV shows, and ads are the predominant homepage content now. From here, the individual user begins to be suppressed. Moderately customizable profile pages are done away with, as the ability to select custom backgrounds, layouts, and color schemes is replaced with a standard layout that limits users to a banner image and profile picture. In November of the same year, Google+ is forced onto its users, without signing up for the failed social media platform, your account privileges are severely limited. Additionally, Google+’s integration overhauls the way comments are prioritized. Users raised concerns about the Google+ policy that forced users to reveal their real names. 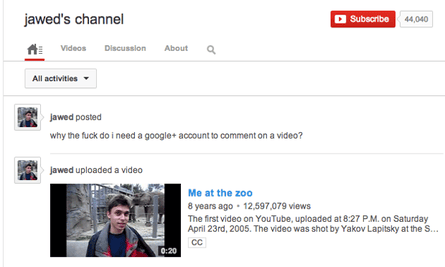 June 14, 2017 Videos are selected brands and content from monetized partners of the site that have a well-known presence outside of the Internet. Independent content is nowhere to be found. Professional news, movie trailers, and sports highlights. Uses the layout and curated content stream we still see in use as of 2019.

December 31, 2017 Influencer Logan Paul uploads a video of himself exploiting the corpse of a victim of suicide in Japan's Aokigahara forest. Despite this incident generating international outrage, Paul recieved a slap on the wrist. His Google Preferred advertising was revoked, and he recieved a channel strike (a penalty that only lasts three months before resetting) yet he is still a staple of the site and uses it as a promotion to accumulate wealth through alternative means. In fact, every year since the incident he has steadily increased in popularity and wealth. As to why he was not removed entirely from YouTube, CEO Susan Wojcicki stated it was because he lacked "three strikes." She went on to say "we can’t just be pulling people off our platform... They need to violate a policy. We need to have consistent [rules]. This is like a code of law.” Many users have been striked or banned from the website for far less rational reasons. It is in this moment YouTube loses all semblance of a soul. The basics of morality are tossed aside to accommodate inexcusable actions. Susan Wojcicki claims to be listening to the users, but her refusal to listen to over 700,000 users who made the effort to sign a petition to have him banned and the larger general public's disgust demonstrates she both lies and lacks a heart.

May 1, 2019 The last remnants of YouTube’s “broadcast yourself” slogan is scrubbed from the site. It was well known before this that the individual user is secondary to the profitable mainstream media that latched itself onto the platform and asserted their control over it.